Stand and deliver! Perhaps the most famous highwayman of all time, Dick Turpin is portrayed as a dashing and daring 18th century horseman who rode 190 miles from London to York on his mare, Black Bess. In fact, although Turpin existed, his famous ride was sadly fictional!

The overnight gallop to York on the sturdy black mare was part of a story written by Victorian novelist William Harrison Ainsworth, a century after the highwayman’s death. Despite the somewhat embellished story of his life, Turpin’s tale is still a fascinating one that has given a rather romantic image to the highway robber. Turpin was said to portray a swaggering nonchalance and a certain heroism throughout his criminal reign, which lasted from around 1730 until his death by hanging in 1739.

Born in September 1705 at the Blue Bell Inn in Hempstead, Essex, Turpin was one of six children born to innkeeper John Turpin and his wife Mary. The young Richard Turpin initially trained as a butcher’s apprentice in Whitechapel.

Despite records revealing he behaved in a “loose and disorderly manner” during his apprenticeship, he went on to open his own butcher’s shop and married local girl Elizabeth Millington in about 1725. However, he veered into a life of crime when he initially began cattle rustling and then tried his hand at smuggling.

He became a member of the Essex Gang, a well-known band of criminals, who travelled the countryside robbing remote farm houses. Turpin and his cohorts robbed their way round the Home Counties throughout the 1730s, until the London Evening Post announced in 1735 that the king had offered a £50 reward (the equivalent of nearly £10,000 today)for their capture. The police eventually captured two of the gang, but Turpin managed to escape by jumping out of a window and fleeing.

He laid low for a while, living rough in the East Anglian countryside until he met Captain Tom King, a well-known highwayman and a devil-may-care swashbuckling type of character, who transformed Turpin into the legendary highwayman that the history books describe today.

Hiding out in Epping Forest, the duo began their spree of highway robbery and achieved such notoriety that a new bounty of £100 (almost £20,000 today) was placed on Turpin’s head in 1737. On 4th May, a gamekeeper called Morris chased Turpin and pointed his gun at him, but the highwayman shot Morris dead – so he was now sought for murder, as well as robbery.

His next exploit almost led to his downfall. He held up a lone rider, Mr Major, on the road to London and stole his horse at gunpoint. Major passed posters round the London inns, describing Turpin and the stolen horse. Turpin had stabled the horse at the Red Lion pub in Whitechapel. Someone recognised them from Major’s description and the police went to the Red Lion to arrest him. However, his cohort Tom King had gone to collect the horse and he was arrested instead.

Hiding nearby, Turpin shot at the officers, but King was shot in the fracas. His wounds proved fatal but before he died, he gave the police information on Turpin’s hiding places, which led to the fugitive living rough again in Epping Forest.

He fled to Yorkshire and took an assumed name, John Palmer. Living a high-flying lifestyle that was funded by his secret excursions into Lincolnshire to steal cattle and horses and to carry out more highway robberies, it seems ironic that it was a relatively low-key crime that led to his eventual downfall – Turpin shot his landlord’s rooster. When the landlord remonstrated with him, Turpin threatened to kill him too, so he was arrested. Police investigated him to find out how he was making his considerable income and he was held in York Castle while the inquiries took place.

A letter that Turpin had written to his brother asking him to “procure evidence from London” in terms of a good character reference to help his acquittal, backfired. It was returned to the post office due to having insufficient postage and provided a link between John Palmer and Dick Turpin, eventually proving that they were one in the same person. 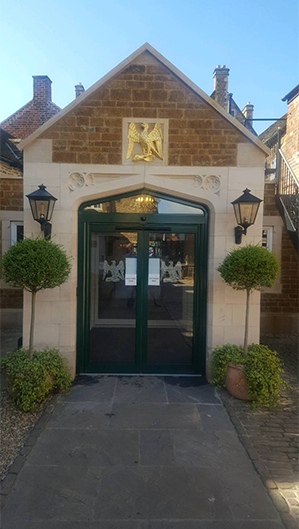 He was sentenced to death, despite his father’s pleas that the sentence should be reduced to transportation. On 7th April 1739, Turpin was carried through York on an open cart, bowing to the crowds in a show of bravado as they lined the streets on the way to his public hanging. He behaved with “courage and brashness” at the end, according to a report in the York Courant newspaper.

Back in the days of Dick Turpin and highwaymen of his ilk, it was often easy for them to evade capture, as they would travel up and down the country, staying at a network of old coaching inns that were frequented by many horsemen.

The Falcon in Uppingham, Leicestershire is a famous coaching inn that dates back to the 16th century. In the heart of the historic Market Place, the hotel still retains much of its historic splendour, although it has been lovingly renovated to combine traditional styling with modern facilities.

Automatic Access was commissioned to tastefully renovate the Falcon Hotel by installing an automatic telescopic sliding door to the inside of the lobby and the outer swing door entrances – in keeping with the hotel’s historic charm. The refit assures easy access for guests but especially for those who are less able-bodied. For further information on our automatic door solutions, please give us a call.