Due to the COVID-19 virus, we have taken the responsible decision to close our business for the next 3 weeks.

With any enquiries or for more information on our products/services, please contact us via email.

The Battle of Bosworth was the last significant battle of the Wars of the Roses during the 15th century. The era marked a period of great civil unrest in England, when the Plantagenet king, Henry VI, was on the throne. Born in 1421, he had ascended to the throne at just nine months old, following his father’s death.

He had married a French princess, Margaret of Anjou, in 1445. She was ambitious, while the king was weak. Rivalries and jealousies in the court were threatening to erupt. On one side there was the queen, backed by her circle of nobles, the Lancastrians – named after Henry’s surname, Lancaster.

On the other side, Henry’s cousin, Richard, Duke of York, stood with his nobles, known as the Yorkists. Richard was a descendant of King Edward III and subsequently had claim to the English throne too. They opposed the Lancastrians and the situation was tense.

Added to the general discord was the fact Henry VI had periods of insanity, when he made rash decisions. In 1454, during one of his periods of insanity, he made the mistake of dismissing some of the queen’s Lancastrian advisors. This caused very bad feeling at the time.

Some months later, when Henry recovered his good health a little, he then dismissed York instead. The bad feeling rumbled on between the Lancastrians and the Yorkists, and the weakened king couldn’t control the discord.

The Yorkist Earl of Warwick also stood on the side opposed to the queen and during the mid-15th century, both sides began to recruit soldiers in preparation for war. Many of the soldiers had been fighting in the Hundred Years War in France, so there was an abundance of trained men to choose from.

Wars of the Roses

A series of battles continued throughout the three decades, with some won by the Lancastrians and others by the Yorkists. Richard, Duke of York, was killed in December 1460 at Battle of Wakefield, when the Yorkists were defeated. His successor was his son, Edward.

Henry VI was captured and imprisoned in June 1465 and was eventually killed in the Tower of London in 1471. Edward IV was crowned king and reigned until his death in April 1483. His son, Edward V, succeeded him but Parliament declared him illegitimate.

Edward IV’s brother, Richard, Duke of Gloucester, succeeded to the throne and became King Richard III. Still the civil unrest continued and in August 1485, the last of the Lancastrians, Henry Tudor, sailed from France to Milford Haven with 2,000 soldiers, as he prepared to stake his claim to the throne of England.

The result was the Battle of Bosworth on 22nd August 1485 – a decisive moment in the Wars of the Roses. Henry Tudor’s army had doubled in size, with more soldiers joining their ranks as they marched through the Welsh countryside.

On learning of Henry’s arrival, Richard III mustered his Yorkist army at Leicester until it was 10,000-strong. He waited with his troops on a hilltop just south of Market Bosworth.

Henry’s stepfather Thomas, Lord Stanley, also arrived at Market Bosworth with his own private army of around 6,000 men. A bloody battle followed, during which Richard led the charge directly at Henry to try and bring it to a swift end.

In doing so, Richard became separated from his main body of troops and suffered further mishap when his horse’s legs became bogged down in the ground. Richard continued to fight on foot, but was overwhelmed and killed, becoming the final English king to be killed in battle. He was the last Plantagenet king of England.

Richard’s army surrendered and left the battlefield on his death and Henry was crowned king on Crown Hill. Richard was buried in an unmarked grave at Greyfriars and lay undiscovered for more than 500 years, until his tomb was discovered by archaeologists under a car park in 2012.

In March 2015, Richard III finally had a burial fit for a king after his untimely end at the Battle of Bosworth, more than 500 years earlier. The last of the Plantagenet kings was finally laid to rest in a fitting manner at Leicester Cathedral.

Thanks to the tireless campaigning of the Scottish Branch of the Richard III Society, which had continually requested a dig at the site, his body was discovered at Leicester’s municipal car park.

The dig unearthed the remains of the ancient Greyfriars Monastery. Accounts written immediately after the Battle of Bosworth said Richard had been buried in a pauper’s ceremony at Greyfriars, “without pompe or solemne funeral”.

His second funeral ceremony befitted his social status, as his body was placed in a lead-lined oak coffin and taken on a 20-mile route through Leicester, past the significant places of his life. Members of the public lined the route to see the spectacle and pay homage.

The funeral procession stopped en route at Fenn Lane Farm, close to where he was killed in battle, where Rev Hilary Surridge led a brief ceremony. The procession also stopped at the village of Sutton Cheney and then at Bosworth itself, where Bishop Stevens led a ceremony at Bosworth Heritage Centre.

Finally, Richard’s remains were taken by a horse-drawn hearse to Leicester Cathedral, their last resting place, going past a new statue of the king, with his sword drawn in battle.

A service of re-internment was led by the Archbishop of Canterbury, Justin Welby, after which King Richard’s coffin was lowered beneath the ground into a specially-designed tomb made from Yorkshire Swaledale stone. 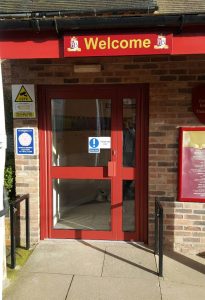 The famous battle is commemorated at the Bosworth Battlefield Heritage Centre, which is an award-winning visitor attraction in Leicestershire. Located in rural England, near the village of Sutton Cheney, the attraction assures a fun and informative family day out.

It includes the heritage centre and shop, the beautiful country park and “living history” events, such as the chance to visit a soldiers’ camp of 1485, and outdoor theatre performances.

Automatic Access was commissioned to install a master and slave automatic door to the heritage centre, replacing the old manual-opening doors. The new doors provide smooth access for staff and members of the public and comply with the UK’s disabled access requirements. Please contact us for more information on our range of access solutions for public buildings.