Due to the COVID-19 virus, we have taken the responsible decision to close our business for the next 3 weeks.

With any enquiries or for more information on our products/services, please contact us via email.

The Invictus Games is an international sporting event that was launched by the Duke of Sussex for wounded, injured and sick armed forces personnel and veterans. The event was launched in 2014, following Prince Harry’s trip to the United States in 2013.

Watching the American Warrior Games, he saw how valuable sport was in helping the service personnel physically, mentally and socially. He was inspired to launch the Invictus Games on his return to the UK and has said in interviews that they have a personal significance for him too. 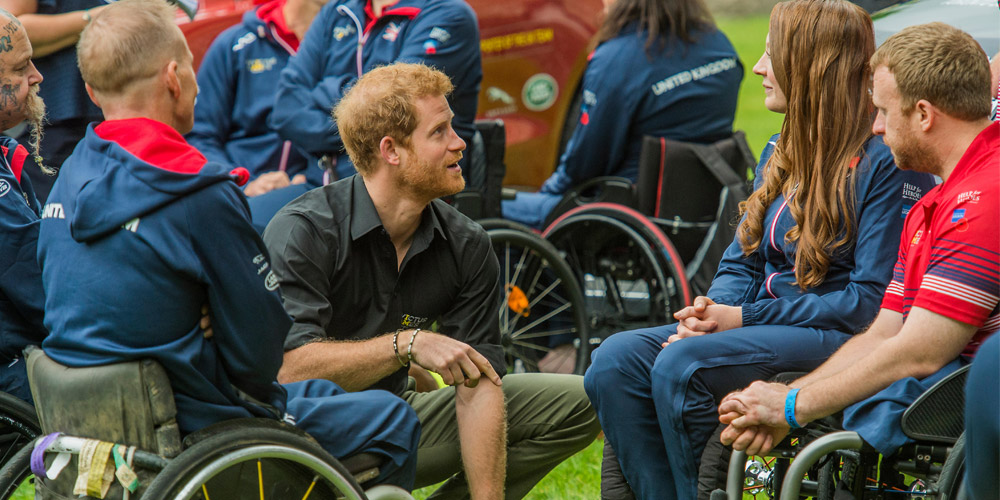 Prince Harry himself is a war veteran who served with the British Army for ten years. He completed two tours of duty to Afghanistan and said in an interview that his military service in the war zone had forced him to confront the emotional issues that had affected him since the death of his mother, Princess Diana, when he was 12.

The prince attended Sandhurst military academy and began his military training in earnest in 2005, joining the Blues and Royals in 2006. At the age of 23, he was on active duty in Helmand, Afghanistan, for more than two months, although it was kept secret at the time for security purposes.

He received his Apache Flying Badge in 2011 and began his second tour of duty in Afghanistan in 2012. As a member of 662 Squadron Army Air Corps, he was stationed at Camp Bastion. He was gunner and co-pilot in an Apache helicopter, completing a 20-week deployment, despite news reports by Reuters that he was being targeted by the Taliban.

When Prince Harry launched the Invictus Games, he chose their name for a good reason, as the word “invictus” is Latin for “unconquered” and “invincible”. It embodied the fighting spirit of the injured and wounded service personnel, giving them the chance to show what they could achieve post-injuries.

The Invictus Games made its debut at the Queen Elizabeth Olympic Park in London in September 2014. After the first event, the Invictus Games Foundation was set up to ensure it would continue to inspire many “wounded warriors” on their road to recovery in the future.

The second games were held at the ESPN Sports Complex at Walt Disney World, Florida, in May 2016. The third games took place in September 2017 in Toronto, Canada, while the most recent event was held in Sydney, Australia, in 2018. Prince Harry always attends the games in person.

Other members of the royal family have attended past games and so have various key political figures, such as the former British Prime Minister David Cameron, former US president Barack Obama, Queen Elizabeth II, Prince Charles and Camilla, Duchess of Cornwall, Frederik the Crown Prince of Denmark and Prince William.

It has been announced that the Invictus Games 2020 will be taking place in The Hague in The Netherlands, presented by Jaguar Land Rover. More than 500 competitors from 19 nations will take part in a selection of sports.

The Invictus Games 2020 will be held at various venues over the course of the week. The Zuiderpark in The Hague is the main location, while other venues will include the athletics club Sparta, the Sports Campus and the Het Nieuwe Hofbad’ in Ypenburg for swimming.

Between 9th and 16th May 2020, the Zuiderpark will be called Invictus Games Park for the duration of the event.

The host cities’ venues and accommodation must be fully accessible for disabled competitors and spectators. Disability advocates believe the event is useful for another reason, in that it highlights the accessibility challenges that disabled people face every day.

When the games were held in Sydney in 2018, the consensus was that the disabled facilities were much better than they used to be, but there were still areas in need of improvement. Although new lifts were specially built to access the Harbour Bridge, getting there from Circular Quay remained a challenge.

Disabled people in wheelchairs had to take a longer route involving going up and down hills, as stairs blocked their way to the lifts on the shorter route.

Holland in general has a good reputation for the provision of disabled facilities and there are also options for travellers to hire a modified cycle or a beach wheelchair for the duration of their trip.

The Forces in Mind Trust has presented the Invictus Games Foundation with a grant ‏to explore the long-term benefits that competing in the games has on competitors. The four-year study is called Beyond the Finish Line. It is assessing how the competitors’ well-being has improved, compared with non-competitors. Around 300 competitors are taking part in the study.

Opening the door to everyone!

To ensure buildings are fully accessible for disabled people, Automatic Access installs high-quality automatic door systems compliant with current disability legislation. Please give us a call on 0116 269 5050 for further details of our products and services.